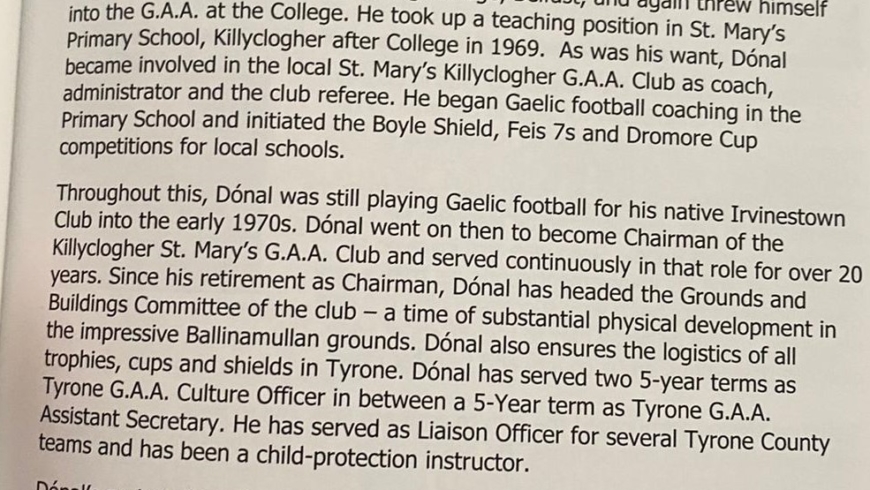 SHARE
DONAL MAGEE LONG SERVICE AWARD – GRADAIM AS SEIRBHÍS FHADA
It is with great pride that we send massive congratulations from all at the club to our very own Donal Magee who is today recognised on the National stage at the All Ireland Scór Sinsir Finals in Mayo for his contribution to our culture and language. Here is the write-up in today’s All Ireland Final programme:
“Anyone who has ever visited the Killyclogher/Cappagh GAA grounds at Ballinamullan in Co Tyrone are sure to have met Donal Magee – a permanent fixture, you might say! Anyone who has ever attended a Scór na nÓg or Scór Sinsear event at county, provincial or national level is also sure to know Donal.
Donal was born in Irvinestown, Co Fermanagh, into a proud GAA home – a meeting place for local players after matches. After a childhood immersed in all things GAA and Irish, Donal attended St Joseph’s Teacher Training College, Belfast, and again threw himself into the GAA at the College. He took up a teaching position in St Mary’s Primary School Killyclogher after College in 1969. As was his wont, Donal became involved in the local St Mary’s Killyclogher GAA club as coach, administrator and the club referee. He also began Gaelic football coaching in the Primary School and initiated the Boyle Shield, Feis 7s and Dromore Cup competitions for local schools.
Throughout this, Donal was still playing Gaelic football for his native Irvinestown club into the early 1970s. Donal went on then to become Chairman of the Killyclogher St Mary’s GAA club and served continuously in that role for over 20 years. Since his retirement as Chairman, Donal has headed the Grounds and Buildings Committee of the club – a time of substantial physical development in the impressive Ballinamullan grounds. Donal also ensures the logistics of all trophies, cups and shields in Tyrone. Donal has served two 5-year terms as Tyrone GAA Culture Officer in between a 5-Year term as Tyrone GAA Assistant Secretary. He has served as Liaison Officer for several Tyrone County teams and has been a child-protection instructor.
Donal’s period of involvement in Scór has been a period of unprecedented success for Tyrone in terms of Scór participation and titles – none more so than for Donal’s beloved Killyclogher club. Donal makes sure that Scór maintains its centrality at the heart of our Association. He promotes and has served as a Scór officer at club, provincial and national level. Donal was the lead organiser of the Ulster Scór Caoga Celebration Concert in 2019 hosted by his own Killyclogher club.
Donal also started the Tyrone T Pin programme to promote the use of the Irish language, an initiative that was also subsequently rolled out in every Primary School in Tyrone. An impressive Irish language section was also added to the Tyrone GAA website.
Donal runs regular National Anthem workshops to ensure that Amhrán na bhFiann is sung before all County (and indeed Killyclogher) games. This is but a brief (and not complete) synopsis of Donal’s contribution to the GAA, and particularly his contribution to its culture and language role. Donal Magee – a proud GAA man and a man that knows the importance of the culture and the language to our Irishness.
FÍOR-GHAEL GO SMIOR”
A true Gael to the very marrow – Of course, we have know that about Donal for a while now!

Proud to be part of