Winning numbers in the Lottsodoo were 11, 23, 25, 26, 30 and six winners each won £20. The jackpot stands at £5,000 for next week’s draw which will be made on Monday evening. Don’t forget that club lotto can now be played online on Klubfunder.

Our reserve men were victorious over Omagh on Friday night. The senior game was abandoned due to an injury to the referee but was replayed on Monday evening and we fell to the narrowest of margins. On Friday evening, we travel to Carrickmore for reserve and senior games at 6:45 and 8:15pm.

Our senior ladies began their league campaign on Saturday with a draw against the Moy. This Sunday at 7:00pm, they are at home to Castlederg.

Our U19 boys were defeated by Carrickmore on Sunday in a high-scoring game ending their league campaign. Hopefully, they will be in championship action at a later date.

Our minor girls defeated Killeeshil last night, Tuesday, and are at home to St Macartan’s next Tuesday.

Our U17 boys were defeated by Carrickmore last Thursday in another high-scoring game and are at home to Loughmacrory tomorrow night, Thursday.

Our U15 boys match with Trillick was postponed but they are at home to Fintona this Saturday.

Our U14 girls are away to Aghaloo tomorrow night, Thursday, and at home to Trillick on Saturday.

Our U13 boys are away to Dromore tonight, Wednesday, and at home to Carrickmore next Wednesday.

The U11.5 boys had a challenge match against Drumragh on Saturday. Our U7.5, U9.5 and U11.5 boys are at home to Carrickmore this weekend in Go Games.

The U8/U10 girls had Go Games against Omagh on Tuesday and the U12 girls played Omagh on Monday.

Well done to St Mary’s Killyclogher (boys) and St Ronan’s Recarson (girls) who were the winners in our Primary Schools competition, The Donnelly Cup, last week. Thank you to all who took part and helped to organise.

Good luck to Michael Rafferty and the Tyrone 2020 Minors who play Derry in the Ulster Championship this Saturday.

Thank you to everyone who helped out at the drive-in bingo last Sunday.

Sincere sympathy to the Cunningham family on the death of Fr Seán Cunnningham. They have a long history of support for our games, at both county and club level. 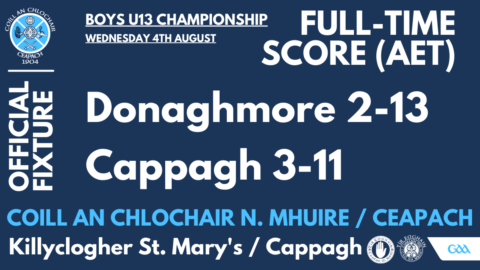 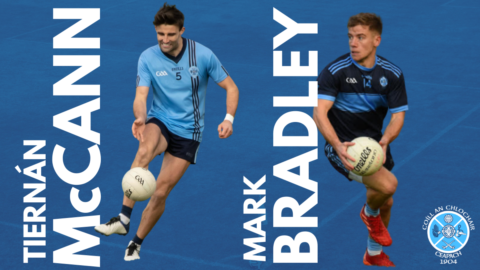 Good Luck to the Tyrone Seniors in the Ulster Final