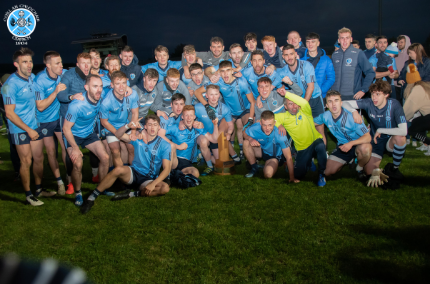 “Spot-kick heartache for holders as Killyclogher are crowned champs

KILLYCLOGHER returned to the heart of their darkest hour this season on Saturday – identical penalty spot/ identical set of town end goals – but this time it was them who came out shining.

Little over five weeks after their Championship dreams were dashed by Trillick on spot-kicks, the same cruel but gripping practice was required to determine the destiny of the Brendan Dolan Trophy.

On this occasion however Killyclogher came up trumps, edging the penalty shoot out 3-2 after yet another of those long and dramatic evenings at Healy Park which have become common place this season.

It was tough on the reigning champions Dromore, and especially seasoned campaigners like Eoin McCusker, Ronan McNabb and sub Sean O’Neill whose zest and enthusiasm in the second half and first period of extra time, was of men chasing their first Senior League medal, not players with a hatful already stashed away at home. Equally the younger generation in Peter Teague, Nathan McCarron and Emmet McNabb also produced trojan efforts in St Dympna’s cause and when they hit eight unanswered points to turn a four point deficit into a four point cushion in extra time, another Division One title seemed destined for Gardrum Park.

However Killyclogher, who led 2-4 to 0-5 at half-time thanks in the main to a one man wrecking crew scoring impact by Conall McCann, refused to throw in the towel despite being held scoreless at one stage for almost half an hour.

Trailing 0-18 to 2-8 at half-time in extra time, they kept chiselling away before eventually super sub Simon O’Neill blasted over the equalising point with the last kick of the game to set up the penalty drama.

With the McCann brothers receiving ample support from the likes of Danny Gorman, Matthew Murnaghan and Nathan Donnelly, Killyclogher were the more composed and cohesive of the two sides in what was a fairly lethargic first half.

They enjoyed a dream start too with Conall McCann following up on his early converted free by finding the net in the sixth minute after Mark Hayes shot deflected kindly into his path.

Despite the boost of a McCusker free (a man chasing an incredible ninth SFL medal) Dromore were further rocked by the concession of another goal to McCann in the ninth minute, the Tyrone player providing a crisp low finish past Damian McGale, with Hayes the creator.

In the main the action was quite scrappy and laboured though two excellent points from play blasted over by McCusker and Cahir Goodwin handed Dromore a platform on which to build.

They struggled however to make inroads through a well-marshalled St Mary’s back unit, and a brace of sweetly struck McCann scores widened Killyclogher’s advantage, even if they also wasted a few more chances.

Approaching half-time the intensity levels at last began to increase with Ryan McCusker surging up the left and firing over a Dromore point, while McCusker slipped over a close range free. But a lovely conversion on the turn by Mark Hayes eased Killyclogher five in front at the break.

The lively Hayes planted another quality effort on the restart, and with McCusker and Mark Bradley trading frees, Killyclogher were still in the ascendancy. There were signs though that Dromore were springing to life and a couple of sharply taken Emmet McNabb points from the right flank gave them renewed belief, with midfielder Sean McNabb also banging over a score with real conviction.

Yet heading towards the last ten minutes it appeared that St Mary’s would hold their opponents off at arms length as Tiernan McCann and Bradley (free) both registered.

This was far from over though and driven on by McCusker, O’Neill, the three McNabbs and Teague Dromore stormed right back into contention.

Upping their physicality they forced turnover after turnover and with Killyclogher pegged on the backfoot, the gap grew narrower.

Another sublime Emmet McNabb finish and two further McCusker pointed frees left one in it and as the match ticked into stoppage time, Peter Teague stepped up to land a 40m free, so sending the match into extra time (Killyclogher 2-8 Dromore 0-14).

There was no shift in the pattern of the match as St Dympna’s continued to launch attack after attack to which it appeared Killyclogher had no answer. Sean O’Neill, Ciaran McCoy, Ronan McNabb and Ryan McCusker each put the seal on some purposeful approach work with confident strikes, and at the mini turnaround the scoreline read 0-18 to 2-8.

But there was to be yet further twists in the narrative as Killyclogher rose off the canvas. Simon O’Neill and Mark Bradley slotted close range frees, and while Ronan ‘Magpie’ McNabb fisted over at the other end, St Mary’s were not to be denied.

O’Neill left them one in arrears with a free and with time almost up he released the trigger from 40m range to set up the penalty shootout.

Respective keepers Damian McGale and Oran Grimes both pulled off some super stops as the spot-kick excitement escalated, but in the end after Conall McCann converted his, the unfortunate McGale was off the mark with Dromore’s fifth, as Killyclogher sealed the spoils following a marathon evening.

THE GAME AT A GLANCE

In a match of such drastic momentum changes, no-one was able to put in a sustained shift. However McCann’s stunning first half scoring return of two goals and three points ultimately made all the difference. Showed real predatory instincts to take his opportunities. As the match progressed his defensive diligence and cool head were also key as St Mary’s were pegged on the backfoot.

Brian McCallion had a fairly effective outing with neither side really in a position to grumble about too many calls. Yes there was the odd free which could have been called, or not called, but these tended to balance themselves out over the hour. Some head high lunges resulted in bookings, though a cynical grab back of Tiernan McCann in full flow late on was a textbook black card, but not given.

Cometh the hour as they say and with extra time in its final throes Simon O’Neill stood up to be counted. Killyclogher were pushing and probing for an opening to level matters up but 40m out O’Neill took the bull by the horns, swinging over a beauty with his left foot to set up a penalty shootout.

So much for the league being irrelevant. Try telling that to these two teams who gave it their all over a pulsating contest which built to an exciting crescendo. Killyclogher looked like they had it won, then Dromore seemed nailed on to win it, before back stormed the Ballinamullan boys again to seal a draw and then clinch their third Senior SFL title on penalties.“

The new league champions hit the ground running and opened up an early 2-1 to 0-1 lead with Conal Mc Cann accounting for all three scores. Dromore recovered their composure and with Eoin Mc Cusker showing well they began to narrow the gap. Mc Cann added two further points while Mark Hayes chipped in with a fine score. Cahir Goodwin, Ryan Mc Cusker and Eoin Mc Cusker each scored to leave the score 2-4 to 0-5 at the break. Dromore were much improved after the restart. They enjoyed greater possession and created numerous chances but after Mc Cusker and Hayes swapped scores Mark Bradley pointed to extend the Killyclogher lead. A brace of Emmett Mc Nabb scores and a Sean Mc Nabb point reduced the gap to three as Dromore made their chances tell. Tiernan Mc Cann pointed to ease the pressure on Killyclogher stretching their lead to four but Dromore were beginning to get on top. Bradley and Mc Cusker swapped points again with eleven minutes remaining but that would prove to be Killyclogher’s last score of normal time as points from Eoin Mc Cusker (2), Emmett Mc Nabb and a last minute kick from Peter Teague tied the scores and took the game to extra time.Dromore now had momentum and wind assisted they bossed possession and eased into a four point lead at half time in extra time with Sean O’Neill, Ciaran Mc Coy, Ronan Mc Nabb and Ryan Mc Cusker all on target.Killyclogher were faced with a mountain to climb but a couple of early scores from Simon O’Neill and Mark Bradley gave them hope. Ronan Mc Nabb then sent over a fine score to put Dromore three ahead with time running out. However Killyclogher, with Tiernan Mc Cann outstanding clipped over three late points to take the game to penalties. The equalising score came from the boot of Simon O’Neill who hit three points in the second period of extra time.Unfortunately for Dromore they came up short in the shootout and Killyclogher claimed their third league title. 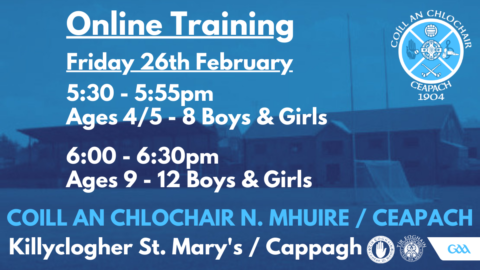 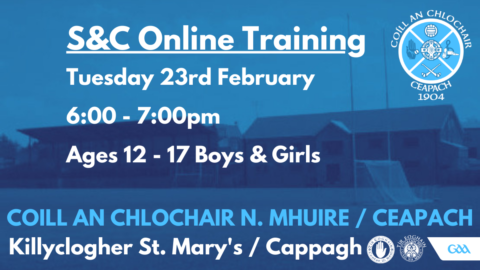