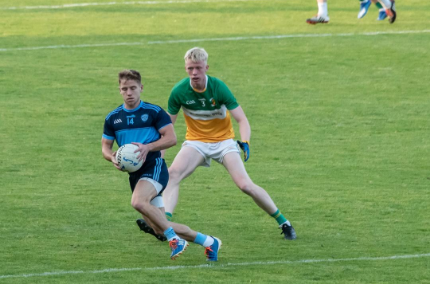 Our senior men defeated An Charraig Mhór last night, Friday 14th August, in the first round of the Tyrone Senior Football Championship in Healy Park. The final scoreline was 2-13 to 2-10.

Mark Bradley’s classy finishing made all the difference as Killyclogher held off a stubborn Carrickmore challenge at Healy Park to clear a difficult LCC Group Tyrone SFC first round hurdle.

His 1-9 haul set up a quarter-final with either champions Trillick or Galbally, but the St Mary’s side had to battle right to the end to get the better of a famous Carmen instinct for survival.

On a balmy evening in Omagh, a near-empty stadium was sadly lacking in Championship atmosphere, but the intensity of an uncompromising contest raised the passions of the small cohort of supporters permitted to attend.

Killyclogher raced into a three points lead, with Bradley landing a couple of delightful efforts, but they were stunned by a Carrickmore goal after seven minutes.

It was Mickey Donaghy who latched on to a loose ball 12 metres out and sent a low shot flashing past Oran Grimes to the bottom corner of the net.

The St Mary’s were sharper, and were soon back on the attack with Bradley and Tiernan Cox hitting the target.

And while Cormac Munroe and Rory Grimes stepped up the Carmen tempo, they faced a defiant defence in which Gabhann Sludden, Jordan Barton and Tiernan McCann stood firm.

Nevertheless, Carmen drew level again just after the water break with a Martin Penrose free, and the former Tyrone star edged them ahead, fetching confidently from Sean Donnelly’s delivery to split the posts in the 20th minute.

Bradley saw a deflected shot at goal come back off the butt of a post, while at the other end, two Rory Donnelly scores kept the Colmcilles in front.

And Donnelly had a golden goal chance, getting in behind the last defender to collect Sean Donnelly’s long delivery, but goalkeeper Grimes was quickly off his line to keep out the shot.

Tiernan McCann pushed forward for a couple of scores to send his side in with a 0-9 to 1-5 advantage, after the scores had been level on five occasions in the first half.

Killyclogher were awarded a penalty five minutes into second half for goalkeeper Jack McCallan’s challenge on Jordan Barton, with Bradley slotting home the kick.

The introduction of Ruairi Grimes, Daniel Fullerton and Barry Daly added a spark to the Carmen attack, and all three hit the target to narrow the deficit to a single point.

But a second Killyclogher goal, skilfully executed by youngster Mark Hayes from Nathan Donnelly’s long ball, saw the momentum swing back in favour of the men in blue.

Barry Daly won a penalty that Martin Penrose converted to make it a two points game, but once again, Bradley, and Conall McCann found the finishing touch.

Conor Gormley pressed high in a bid to get his side back into contention, and Fullerton and Sean Loughran fired over points deep into stoppage time.

Subs: A Kelly for O’Neill, M Murnaghan for Cox

THEY were made to fight for it, but a Mark Bradley-inspired Killyclogher did just enough to see off Carrickmore in tonight’s first-round clash at Healy Park.

Bradley was in fantastic form from start-to-finish and his final tally of 1-8 went a long way as they earned a 2-13 to 2-10 victory to set up a clash against the winners of Trillick or Galbally.

Carrickmore looked leaden in the opening exchanges with Bradley and Oisin McCann splitting the posts, but a Michael Donaghy goal against the run of play spurred them into action.

By the half-time whistle, Killyclogher held a 0-9 to 1-5 lead which still flattered their opponents somewhat.

Carmen came out strong in the second-half, but they struggled to get the ball over the bar and were punished for their wastefulness when Bradley coolly converted from the spot.

Carrickmore didn’t throw in the towel with substitutes Danny Fullerton and Ruairi Loughran scoring fantastic points, but the wind was taken out of their sails when Mark Hayes scored Killyclogher’s second goal of the night.

Ryan Daly’s team fought hard but Killyclogher had just enough to see them off with Mark Bradley fittingly scoring their final two points.

Proud to be part of

We Value Your Privacy
To provide the best experiences, we use technologies like cookies to store and/or access device information. Consenting to these technologies will allow us to process data such as browsing behaviour or unique IDs on this site. Not consenting or withdrawing consent, may adversely affect certain features and functions.
Manage options Manage services Manage vendors Read more about these purposes
View preferences
{title} {title} {title}